Posted on November 17, 2017 by catherinekane

Now that “Living in Interesting Times” is out, I’ve been spending more time with “The Swans of War” , the sequel to my first urban fantasy “The Lands That Lie Between”.

In our first book, our heroine Morgan loses her job, moves cross country and then 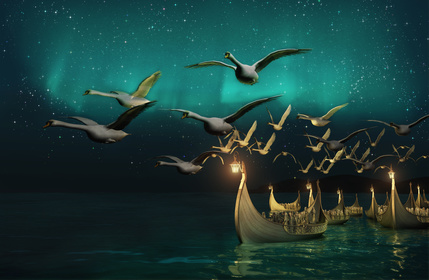 discovers that the worlds of magick are real, are very close to our own and that she has a crucial role to fill to prevent darkness from taking over both worlds. She goes on the run with Sam, her talking cat  and together they somehow escape multiple Unseelie hunters, make their way to the court, and do their bit to tip the scales to Seelie victory.

Well, it’s a year lately, and evil wants a rematch. An Unseelie villain is trying to stir up trouble between the Seelie court and the swan people, nomadic Germanic shape changers  with anger management issues. Meanwhile, a suspicious plague has laid most of the Seelie court low.

You guessed it- it’s Morgan and Sam to the rescue again.

I’m currently hard at it, untangling accents, laying out multiple story lines and weaving the action together as all of the characters rush towards one final confrontation.

(And there’s a winged kitten.)

Anyway, back to editing…

For more information on Catherine’s books, “Adventures in Palmistry”, “The Practical Empath – Surviving and Thriving as a Psychic Empath”, “Manifesting Something Better”, “The Psychic Power of Your Dreams”, “Magick for Pennies” and her urban fantasy “The Lands That Lie Between”, all from Foresight Publications, click here

and for the new Kindle version of Manifesting Something Better, click here

This entry was posted in My Writing, and What's Up With That and tagged "Adventures in Palmistry", "The Lands That Lie Between" by Catherine Kane, "The Practical Empath - Surviving and Thriving as a Psychic Empath", “Magick for Pennies: Affordable Metaphysics for Everyone”, Catherine Kane, Foresight Publications, Living in Interesting Times, Manifesting Something Better, The Psychic Power of Your Dreams, The Swans of War, Writing. Bookmark the permalink.